The Wolf Knights is a minor faction that inhabits the lands of the Reich des Drachen. It is led by Lupus, the brother of Remus. As of 0.8, Remus can be found in the Murdenholl tavern and gives his associated quest.

The Wolf Knights were founded recently by a man named Lupus, who claimed he could communicate with wolves. According to his brother, Remus, he was assigned to guard livestock at night from the wolves when they were simple farmer boys. But the wolves never attacked: they watched silently, barely visible by the light of Lupus' torch. It was one day when Lupus appeared to talk with Remus, claiming that a wolf had spoke to him and he was led to something. When inquired about it, he simply avoided the question.

One day, Lupus found himself in a heated argument with a man in his village. The argument turned violent in front of the whole village and in a blur of superhuman speed, the man was dead, skull crushed. As Lupus looked at his bloody hands and was sentenced too exile, Remus accompanied him out of choice. As the two brothers left the village, Lupus placed his hand on Remus' forehead. Remus (whom you can talk with in the Murdenholl tavern in Perisno 0.8) stated that it was the bloodlust of battle, the exhiliration and thrill of adredaline multiplied a hundered-fold that instantly paralyzed him. But when he recovered, both Lupus and Remus could perform superhuman feats of combat and strength. They could hurl boulders, run as fast as deer, knock an enemy to his/her feet in less than a second. Remus even states that he could knock the player to his/her feet and be out of the town and tavern faster than he/she could get up.

Remus and Lupus went around and won tournament after tournament, gathering up a grand fortune. They used that fortune to buy equipment and turned their following of awestruck fighters into mercenaries. They served lords and ladies: Lupus even found an old fort that they used as their base.

He founded his Order, the Wolf Knights. Over time, Remus, Lupus and changed and became more bloodthirsty, and ruthless. The Wolf Knights grew very powerful, and soon the land they wanted became theirs. Lupus claimed that the lords of Perisno were weak and that men like him and his followers should dominate this world: strong over the weak.

Eventually, Remus and Lupus' forces happened upon a caravan in the Vinica forests. As the traders and their guards were haplessly slaughtered, Remus killed a man's horse and approached him while he crawled on the floor. Barely out of adulthood, the caravan guard bawled and cried. Remus hesitated, and in this time, Lupus rode forth on his black mare. He stabbed the man, and twisted his blade, drawing out his screams.

Later, Lupus pulled Remus apart from the main force for a presumably private chat. Remus expected a scolding, but was delivered a sword in the gut. "The pack cannot function with a lone wolf in its midst." Lupus said. "Die bravely, Remus."

As Remus lay bleeding to death in the Vinica forests, the Archduke Methenor saved him from certain death. You can find Remus in the Murdenholl tavern and can accept his task to deliver a message to Methenor, which can lead to another quest. Strangely, Remus has forgotten the location of the Wolf Knights' headquarters.

As of now, Remus claims that the Wolf Knights and their threat to all of Perisno must be acknowledged. Their world is a world were the strong dominate the weak, and they will stop at nothing to accomplish it. Their top tier Wolf Constables are almost impossible to stop, and some say that they have been given the strength and speed of wolves. There are rumors that they ride wolves as well, although there is no proof. The Wolf Knights are at war with their neighbors, the Reich, Drahara, and Maccavia. Even the formidable Reich Dragoners are no match for the Wolf Knights, proven in countless battles. The Wolf Knights are also very secretive, and no one knows where their headquarters is. If the player should meet these knights, wandering in small parties of 5 to 10, then he/she should be careful, because even 5 of these knights and 1 constable can do significant damage to a well trained army. 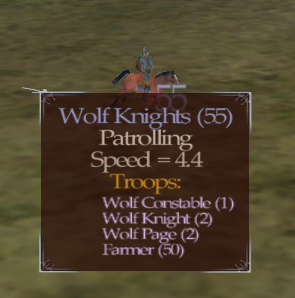 The Wolf Knights' top cavalry are probably one of the best in the entire game. They are on par with the Demon and Eagle lords but are probably slightly weaker. However, since Wolf Knights are the only knight order that can be upgraded, at long term a Constable army is possible to have.

Every one of their units are good, so if the player even acquires their weakest unit, he is at an advantage because he can upgrade them into better units easily. The Wolf Pages are very strong themselves and are hard to kill. However, this is a double edged sword because the Wolf Knight parties are fairly hard to kill. Usually, they run around in parties of 50 farmers and 3-5 knights, which might seem attracting for the player to kill. Be warned, they are no at all easy to kill and 3-5 knights is more than enough to destroy an army of any number of Tier 1-3s. However, once you get to tier 4 or 5 and mass them up, the knight parties will be no problem and in fact, can be a great experience and loot farm.

Sadly the above part has been changed of 0.8, where Wolf Knight parties now consist of large numbers of calvary without farmers, making them superior to the other common outlaw recruits in the game. They are also extremely fast due to the quality and number of units within them.

Retrieved from "https://perisno.fandom.com/wiki/Wolf_Knights?oldid=18106"
Community content is available under CC-BY-SA unless otherwise noted.